Wired Magazine has a nice article about FoldIt, and my teammate "Cheese", a young lad and his family, who are all on my FoldIt team. It's a dramatic re-telling of our successful efforts in the CASP competition.
Posted by Unknown at 5:10 PM 1 comment: Links to this post

I'm enjoy playing this game called FoldIt, which I've written about on the blog before. It's a puzzle game which contributes real results to research into the folding of proteins in nature; a very tough problem in biology.

The first results of our collective efforts have come through, and not only did the concept of "human-directed folding" succeed, but my team (Another Hour Another Point) was a big part of it!

We won one of the puzzles and scored in the top 3 of several others, and the developers have concluded that a pack of untrained game-players match the perform of folding experts, so they can be freed of this work and do something else instead while the Geek Hordes do most of the folding work! This is very exciting :)

Posted by Unknown at 8:15 PM No comments: Links to this post 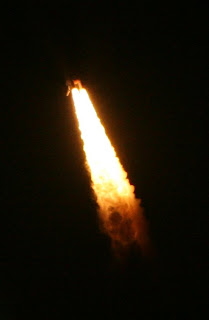 The last scheduled Space Shuttle night launch was yesterday, so being a fan of space exploration in general, I thought I'd better put my foot down and finally make it to a shuttle launch. What kind of space fan lives in Florida and doesn't see a launch at least once?

I'd had a particularly bad day at work - my Great Dane Patch had his first "accident" at work due to a very bad tummy upset, so I spent my last hour apologizing and scrubbing the carpet. I'm going to pay closer attention to this in future, and leave him home if he's had any problems in that department, since I know how lucky I am to be able to bring him to work every day.

Anyway, after that awful mess I decided to treat myself and try to make it to Titusville for the 7.55 pm launch. The weather was good and they said there was a 70% chance of a successful launch, so I zipped home, grabbed the camera and hit the highway.

Traffic was heavy at first, due to a closed lane, but it soon opened up and I reached the Titusville exit at about 7.30 pm. Driving into town I knew there was little chance of reaching Spaceview Park, and it was curious how natural it seemed to just turn off the road into a strip mall parking lot when the car in front of me did so, and the car behind me did the same thing. Obviously we were all there for the same thing.

I turned the radio to a local station that was covering the launch and lowered the windows so I, and the neighbouring cars, could hear some commentary. I put the camera into spot metering mode, attached the 80-200mm zoom and pushed the ISO rating to 800, forcing the camera to use the fastest shutter speed it could. I'm glad I did that, otherwise it'd be streaky-time, and you don't get second shots at this kind of event.

The buzz in the crowd went up at the 30 second mark and when the final 10 second countdown began everyone stood up. When the moment of liftoff came, the whole sky in front of us lit up like dawn, then an amazingly bright spot appeared and climbed to the skies. It was a clear night, so we were able to watch it all the way up, until it was just a bright spot. We could even see the SRBs seperate and begin their tumble back into the ocean. The sound of the launch didn't hit us till about 45 seconds after it had begun, and it was a big bass rumble that seemed to come from the whole sky at once.

There are a lot of things not to like about the Shuttle program, but it's an impressive sight when it launches!

In a few days, Barack Obama will be elected the next President of the United States. This is good. I don't think the Republican party will have the capacity to handle this loss in a rational way, though. I think they'll declare that they lost because McCain wasn't hardcore enough, wasn't conservative enough. They'll retreat into a neo-con fantasy world and complain about Every Single Thing that Obama and the Democractic Congress do, and conspiracy theories about ACORN and dead people voting will flourish.

Still, I've seen a couple of blog postings worth passing enough, that stood out from the pack. Here's one by a certain "Lady De Rothschild", one of the few prominent Hillary Clinton supports who switched over to McCain's side. Her ideas are very sad, but check out the comments section!! That's where the action is :)

And here's a scorcher from Helen Philpott of "Margaret and Helen". Andrew Sullivan linked to them a few days ago. I agree with Helen when she says in a more recent posting that she's surprised the election is close at all. I'll leave to the more learned to write about why McCain has *any* support outside of those who still support George Bush (low 20% range, last I looked). I'm pretty open minded but I just can't see how anyone could pick McCain over Obama. I'm sure they'd say the same in the other direction, I suppose :)

My regular reading, in case you'd like to see where I get these ideas from, covers: Andrew Sullivan, Daily Kos, Talking Points Memo, Think Progress, Glenn Greenwald and Huffington Post. On TV there's the Daily Show and Colbert, Rachel Maddow and Keith Olbermann.
Posted by Unknown at 9:44 AM No comments: Links to this post

I just took a look at Weather Underground and see that Ike's 5-day path puts it barrelling down my driveway. *Gulp*. Hopefully the path will change in the next few days, but if it doesn't then please rest assured this is a new house built with the most recent hurricane resistance standards and it should pull through just fine. I bought flood insurance too, so I'm covered if anything at all should happen :)

Sept 6th Update: It looks like this one is going to miss us. Ike is going to pass over Cuba instead and my part of South Florida is almost out of the cone of uncertainty.
Posted by Unknown at 8:01 PM 1 comment: Links to this post

I first heard this song in a torrent released by the SXSW festival in 2006. What a great voice she has, and this song has such a good melody that I kept meaning to work out the chords and the picky bit at the start. So, here it finally is :) Looking at the videos on YouTube I notice she uses a capo, so adjust accordingly if you want to. Her wiki page loads much faster than her official site.

Tablature
The opening part is just a series of nice arpeggios picked on the highest three strings. You start in the shape of a D chord on the 11th fret.

I'm now Wii-less. I bought a Nintendo Wii just after it came out (use www.wiitracker.com if you still think the only way to get one is to drive to stores and ask. Sheesh.) I bought Excite Truck to go with it and played the heck out of that game and reached #5 on an online high-score tracking site (it's not built into the game). I liked Wii Sports a lot too, of course, especially bowling, but after Mum and Dad's visit a while ago, it just sat there. I'd bought the recent Zelda game too, but didn't enjoy it much. I think Nintendo took too long to get online games working -- they didn't even put online high scores into games, let alone internet play, until quite recently. In fact, it was the huge competitive boost I got by putting my Excite Truck scores into Cyberscore.net that pushed me towards buying an Xbox, who's games are more online than the Wii's.

I realized that the second hand market is still red-hot for the Wii and if I was going to sell it, sooner would be better than later. If I really want to get a Wii again I'm sure Nintendo will start building them in enough quantity that the used price will drop in a year or two.

So it's just the Xbox now, which is used mostly for playing videos off my PC. I have a big increase in my Space Giraffe highscore just around the corner, which I've been meaning to get back to for about a month. Oh, and I moved a record player into the living room too; make of that what you will :)
Posted by Unknown at 10:37 PM No comments: Links to this post

Labels: wii, xbox 360
No More Prosper For Me

I've decided to stop investing at Prosper.com. Maybe its the credit crunch and the general near-recession in the economy, but my borrowers are dropping like flies. If all my current lates don't start making payments soon, I'll be almost in negative returns. I'm still showing a 19% return, but that's only because most of my borrowers are still current and also Prosper.com doesn't sell the loans off as quickly as they used to. I think that's because they'd have a hard time selling them, so they just hang on and hope their collections agency will eventually convince the lates to start paying again. Not much hope of that...so far my 7 hard-core lates have made half a payment between them. Yes, one of them made half a payment. Many of those 7 made either 1 payment or NONE before dropping out. One guy declared bankruptcy after just 2 payments.

Don't lend at prosper.com; it's too hard to pick the winners.

I'm still *fairly* confident that I'll be able to start investing there again under two new conditions: the economy has to turn around and I should pick slightly less risky loans (yes, I went hell-for-leather on risk, I know). Also, avoid ANYONE involved in real estate.
Posted by Unknown at 10:25 PM No comments: Links to this post

I've had an old cellphone from work for about three years, a Samsung a650, and thought it might be my turn to upgrade to a shinier model. Luckily it was and I got a G'zOne.

I'm not sure why we need to get something dust and water resistant, but hey-ho, it's all good. What confused me a little though was how you pronounce it's name, and why is the "O" capitalized. "Gee zone", "guh-zone"...could it be a Narn from Babylon 5? "Gee Zone" seemed right, so I left it at that.

As I was reading the manual though (ooh, voice command, spiffy!) I realized there's a British pronunciation that would not be obvious, or even comprehensible to most Americans: "G'zOne" = "Giz One". As in "Give us one", as in "Give me one". It's common in English slang to use the word "us" to mean "me", especially if the speaker is a young, cocky lad.

I had to admire the layers of interpretation put into this name by the manufacturers: I wonder if it was intentional?
Posted by Unknown at 10:09 PM No comments: Links to this post